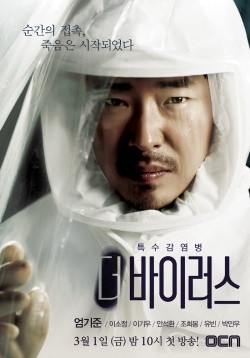 As mentioned in my comeback post, I have been watching dramas since I handed in my dissertation. Although this isn’t the first drama I have watched in May, I have the urge to write about it as I have just finished the series.

The Virus (더 바이러스) is a drama which aired in April & May 2013 and consisted of 10 episodes, making it the shortest Korean drama I have ever watched. I am critical about this drama because, although the story and ending of the drama was amazing, there was something missing for me.

The lighting and acting for the drama was perfect as it corresponds with the dark and cold story. However, I felt like these 10 episodes dragged on and did not grab my attention, apart from of course the extremely handsome Lee Ki-Woo (이기우)! Also more importantly, Uhm Ki-Joon (엄기준) shows amazing acting skills in this drama. Although I found it hard to connect with any of the characters, his acting was outstanding in a few scenes!

For such a smart and unique story, I feel this drama could have been slightly longer and focused more on the characters personalities or development of things (I don’t want to give the story line away!!). However, having said that, as mentioned before the drama dragged on, but I think allowing the viewers to connect with the characters would have added more of a kick to the story line.

I found it interesting that this drama had a lot of English in it! And not from Koreans but from non-Korean actors. However, one flaw was that the non-Korea characters all understood Korean 100% but were unable to talk in Korean…

Of course, the final episode was a bit rushed, but the writer, Lee Myung-Sook (이명숙) came up with a story line that really made me think! Of course the show is about viruses but the way in which Lee Myung-Sook connected the spread of virus with the competitive world and economy was truly amazing!

Although this drama isn’t as exciting as I would have liked, I would recommend watching The Virus for it’s story line. It is a short drama anyway so my fellow Korean drama lovers could finish it in a few days!