So, here is part one!

My friend Destiny, (you can find her blog here!) arrived at about 3pm. We joined the line but we were kinda far back so we were bummed. =[ But we met some girls who were standing in front of us who came all the way from Sweden just to see BigBang! They were cool girls! So me and two of them decided to go to the merchandise stand to buy the infamous crown light sticks and we left Destiny and the rest of the Swedish girls in line. 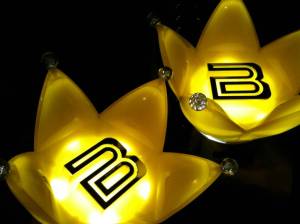 We were gone for about 10 minutes and a few of the Swedish girls came running! They were talking in Swedish and just said to me ‘Just come!!’ So we went back to the line to get my friend and I find out that the girls managed to get us early access!

For people who got there for about 7am, there were a few wrist bands given which would allow them to leave the line and come back later and be let in 10 minutes before everyone else. The girls saw a security guard who they were talking to earlier who came back to them and told them he could get them in earlier than the other people with standard standing tickets. So since we were talking to the girls in the line, they decided to tell the guy that we were with them! He got us wrist bands!

We were all so excited! The girls were all amazing! They were funny and Destiny and I really bonded with them! We were so grateful that we had met them, not only because they were kind enough to say we were with them, but also because they were generally really sweet people!

So we got let in to the stage area and we were about 4 rows behind. This was cause the event managers pissed us around a little and told us that they didn’t know about the wrist bands and all this bullshit. But either way, we got in early than we would have if we stayed in the line! We were told to sit down on the floor for our own safety. =S I guess it was so that we were not being pushed for an hour and a half more than we would be if we were let in as soon as the show started. To make the crowd hyped, BigBang music videos were paying on the screen. Every time a different video came on the crowd would screen and I would think it was BigBang and would get up with excitement!

The lights turn off…