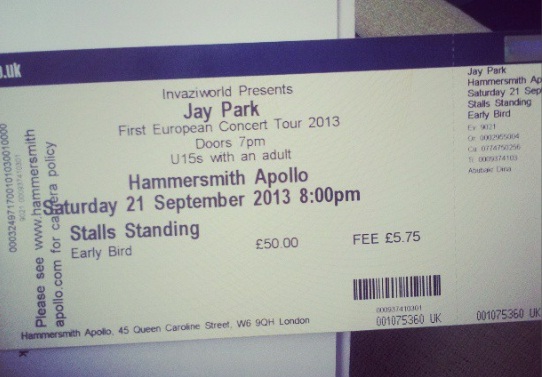 After waiting for years to hear Jay Park even mention a European tour, I have just purchased my ticket to see him in London this September!

Jay announced on the 21st of July that he would be gracing English land with his presence. But there were problems and delays in information and tickets going on sale. They were originally set to be on sale at the end of July but was postponed due to problems with venue and seating plan confirmation.

Today tickets went on sale at 10am this morning and I purchased my ticket at 10:10am . Standing tickets were priced at £50.00 plus a £5.75 booking fee. I am pleased with the ticket price as everything seems cheap after paying shy of £100 for a standing ticket to see Big Bang last December .

So I look forward to the 21st of September! See you soon Jay!